Can I Have You? Is Available Now!

Can I Have You? is available. Y’all…this is our first peek into Madison Grove a fictitious town I created in Texas. It’s a small town I hope to share more of in the future. In this story, we meet Mac and Destiny.

Love hurts…is the truth and the lie powering Destiny forward until she crosses paths with an unmovable object, Ethan “Mac” McKenzie. But will her obsessed ex, a cop, ruin her second chance? 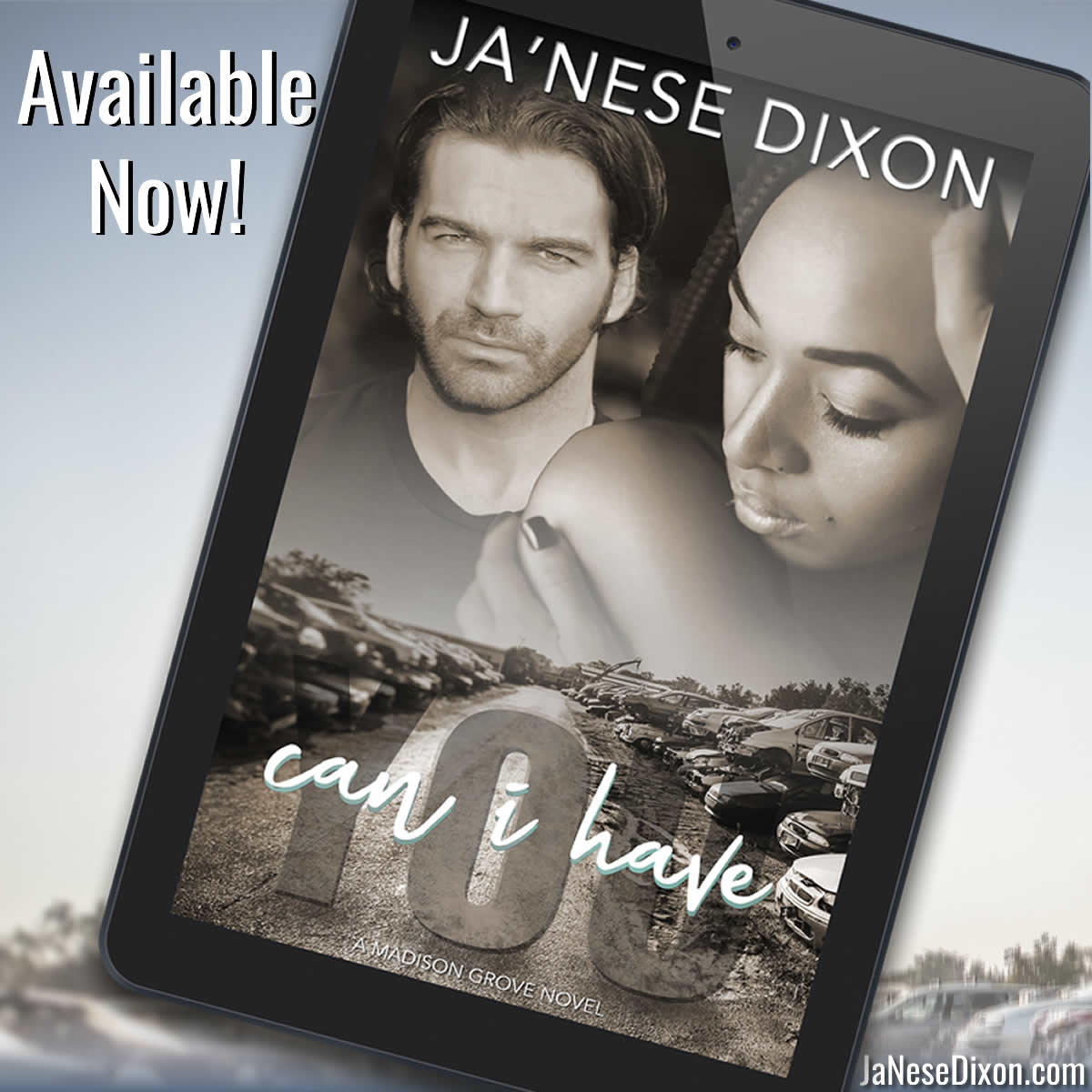 I’m trapped in a beautiful prison. Ryan’s badge keeps me submissive long enough to formulate a plan. Because I can’t stay.

So, I do the unthinkable running back to the only place I consider home, Madison Grove, with him hot on my heels. Then I find Mac again, and he makes my heart ache for more, thanks to his small-town charm and quiet determination. But I’m on borrowed time.

I’m trapped between an obsessed cop and an ex-Marine, outrunning my destiny or finding my forever or both. Because I can’t trust love.

“Dez! Get your ass out here. We want another round.”

I shake my head, exhaling the pent-up energy in my chest. I complete the message to my sister Faith considering my next move. I don’t want to go out there again.

Ryan and his boys yelled and cheered for the past two hours while watching the football game. But with each quarter they got more agitated, questioning the referee’s rulings, berating the owner, and cursing the coaches as their beloved team loses the game. I hear the rustle of clothes.

Oh hell, he’s coming back here. I stand dropping my phone in my back pocket. I yank the hem of my shirt out to hide it. He doesn’t know about her or this phone. I cross the room, pausing in the doorway to listen again. The last thing they need is another round, but Ryan is better handled passed out than awake.

I slip out walking pass the media room and slow down at the sight of their shocked faces. That room is my favorite in the house. Ryan had spared no expense when decorating from the flooring to the high vaulted ceiling. He hired an interior designer and customized everything, but it’s the entertainment center with surround sound that has their eyes glued to the screen.

“Ahhh man! Did he just fumble?” Ryan snaps to his feet, pointing at the life-size player then his angry eyes find mine. “Why are you draggin’ your feet like we have all fuckin’ night?”

Let me get his damn beers. I move faster, entering the kitchen. I flick on the light, his eyes watch my every move. I can’t piss without him standing outside the bathroom since my last runaway attempt.

“Touchdown!” The roar of their cheers echoes through the house as the rumbustious guys get louder. I glance over, and they’re dabbing and congratulating each other like they made the pass.

Play nice Destiny. I lower my head into the refrigerator. The sweet aroma of melon greets me. I push air out my mouth in anguish because I’ve extinguished all of my plans, now I’m left with waiting for an opportunity to arise. The only way I’ll get out of here alive is to make Ryan believe that he can trust me.

I push around the beverages and condiments on the top shelf and find three beers left. Then I open the bottom drawer spotting the grapes. I pop one in my mouth, slamming it shut. Nope, only three. And there’s three of them.

I stay folded over and lift my eyes to peek over the top of the refrigerator door. Ryan is sitting in the recliner focused on the game. Mike, his partner, is talking in his ear, pointing back and forth at the screen as if discussing a play. I reach inside, keeping my eyes trained on Ryan, and remove a beer. I used the tip of my nail and slide it under the tab, slowly releasing the air from the can.

Once the hissing stops, I hold my breath, pressing the tab. The faint crack of the can opening sends my eyes across the room again. He didn’t hear it, sighing in relief.

I extend my hand with the opened can to the sink. I’m lightheaded because I refuse to breathe. He can’t see what I’m doing or he’ll… The options flash before my eyes, and none of them are ideal or pretty. So, I keep him in sight while letting the malt liquor flow down the drain.

“Dez!” He yells impatience laced in his tone.

My heart drops as his opal green eyes glare over the banister separating the kitchen and the media room. I used to love his eyes. He’d turn me on from the mere sight of them. Then add the chiseled body and his smile. He’s all American as apple pie and football. Then he changed.

The can is nearly empty, and I’m praying he can’t see my arm because this beer is my escape plan. “We only have two beers left.” My voice is barely over a whisper.

God, please don’t let this man kill me and let his friends watch him do it.

“Ryan, did you see that pass?” Mike asks.

Ryan looks away, and I hurry, tossing the empty can into the trash.

“I can run to the store and get more.” I train my voice to be even and void of emotion.

His eyes spitfire but I don’t break eye contact. He’s held me hostage in this house for almost three weeks. What makes it worse is knowing they’re all cops, and I can’t ask a single one of them for help. I’ve tried, and it resulted in Ryan nearly putting me in the hospital. He knows how to push it far enough to make a point but not far enough to end my misery.

“Nice try. Bring them. And make me a Jack and Coke.”

Hell. I drop my head. It’s going to be a long night. I move quickly around the kitchen. I take the beers to the guys who mumbled their “thanks” before retracing my steps back to make his drink. I need his favorite glass.

I open the smoky grey cabinets and spot it on the second shelf from the top. He knows I can’t reach that shelf. I inch onto my tiptoes trying to use every bit of my five-foot four-inch height to obtain the old-fashioned crystal tumbler. I stretch with a slight thrust of my left leg and used her middle finger to inch it towards the edge.

“Here let me help you with that.” Mike startles me, reaching around me.

His arm brushes across my breast, and I stumble back hoping Ryan didn’t see it. But the daggers he’s shooting in my direction let me know my hopes went unheard. Rage churns in my gut because I can’t catch a fuckin’ break. And Mike knows Ryan is crazy.

“Thank you.” I push through my clenched teeth. “Did you need something?”

“We need more chips.” His eyes sparkled with mischief as he places the empty glass bowl on the marble counter. Mike’s x-ray eyes make my skin crawl. What is it with jerks? They all flocked together.

“I’ll get it.” I offer in my nicest falsetto to get him out of the kitchen. Mike’s an asshole and a coward like the rest of them. His attempt to get a little feel will result in a fight tonight.

“I’m coming!” My response is harsher than I intended, and his arched brow tells me so.

I grab the bottle of flat soda and poured it into the glass, adding the whiskey with an extra flick of my wrist. He turns back to the game, and this is my shot. I release the powder from one, two, three capsules into his glass. Then I add one more to give me a head start. I stir the concoction with my finger and add a little extra whiskey to mask the flavor of the sedative.

I can make his favorite drinks and meals with my eyes closed. Because in the beginning, all I wanted was to make Ryan happy. To make Ryan love me. Now, I wish Ryan would just let me go.

I head to the family room, stopping to circle back for the chips. I give Ryan his drink.

“I saw that.” He yanks my wrist towards him, bringing me closer. I flinch, bringing my arm up to protect my face. I swallow as tears gather in my eyes. He pushes me away, and the guys laugh as I stumble to the floor.

I won’t give him the satisfaction of seeing me cry. Instead, I crawl backward out of his reach and cling to the silent clock counting down in my head. I’m busting out of this place tonight, and I’m never coming back. I declare with every ounce of my being.

“Get your ass back to the room.”