All Yours is Available Now!

It’s release day!!! All Yours is the second book in the Southern Gentlemen series. It was originally featured in the Romantically Ever After Box Set. The new edition is twice the length of the original.

Watch as Miya runs from her feelings for Dean and the rest of the Montgomerys rally around her. Grab your copy and enjoy! 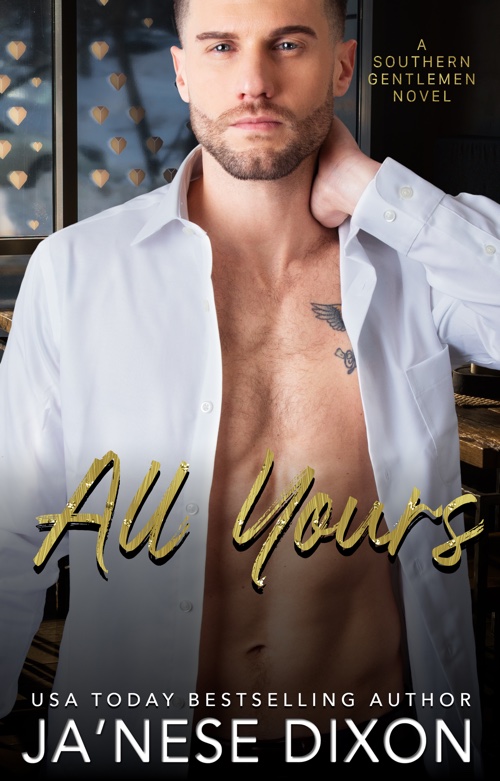 Did you enter the giveaway?

Visit a few stops and enter to win.

Miya’s head chef and one-fifth of Southern Soul Houston. She welcomes her new role in the family’s soul food restaurant until her brother, Kamal, hires his best friend, Dean, to “help” her create a new menu.

Dean arrives in Houston, ready to consult the Montgomery family through this transition, not expecting Baby Miya to be the curvy bombshell who steals his heart on sight.

Ignoring their chemistry is impossible. Dean’s sweet smile and steamy eyes scorch through Miya’s clothes and her objections. However, her tattered heart is counting his casualties, refusing to be Dean’s next victim.

Kamal has a strict rule concerning his baby sister: Hands off. But since when has Dean met a rule he didn’t want to break. And Miya’s finding it harder to ignore his dedication and Southern charm.

Dean’s hell-bent on making their own rules, and Miya’s worried that when he’s had his fill, he’ll leave her with an irreparable heart. But their late nights have her willing to play with fire, praying…she doesn’t get burned.

“What are you doing?”

I spin around, facing the voice. “Minding my business. Who are you, and how did you get in here?”

An unfamiliar man with familiar dark brown eyes stands in the doorway, well, fills it is more like it. I need to adjust my bra and smooth out my clothes. I can only imagine how I look because everybody can’t handle these curves. Still, I’m more interested in getting some answers.

He steps closer, and I slide a chef’s knife from the block, pointing it in his direction. A smolder descends over his eyes, and the temperature in the room heats up a notch.

“Don’t make me turn you into two wings, two legs, and a breast.” I flick my wrist with each cut to show him I’m not playing.

“Baby Miya is all grown up.” His teasing gaze sends a shudder down my spine.

“Baby Miya? Only my brothers call me that. Who are you?” I ask while simultaneously trying to place his face—the strong jaw, dark brown hair, and tanned skin—but there’s no way I’d ever forget those eyes. They’re too distinctive. Too dark. Too knowing. And like a self-defense expert, he claims the knife, pinning my back against the refrigerator.

“You should be careful—you could cut someone.”

“I think that was the point, handsome,” I bite back, and he smiles, and it’s as tasty as cream cheese icing on warm carrot cake.

“How’d you get in?” I ask, moving to free myself, and his grip tightens, not meant to harm. The contour of his biceps through his expensive suit jacket tells me that he’s cut, and if he wanted, he could lock me down. But the hold of his strong hands feels more like a caress.

Every cell in my body stands at attention. Heart pounding. Lungs demanding. Eyes shifting, openly assessing one another.

His lips, one thin, the other plump, both tempting, hover inches from mine. The scent of spearmint rushes between us every time he exhales.

Caught between cold steel and a rock-hard body, I’m suddenly tongue-tied, which is unlike me. But what’s a girl to do with a man like this?

I lick my drying lips, and a deep groan vibrates through his chest and mine, as if in agony. A wave of emotion crosses his face. I’d call it pleasure if I knew him better or maybe determination as he steps back, freeing me. He replaces the knife in the stand, angling his body towards the door.

“I’m on my way. I need to settle a few things at the restaurant.” Kamal talks on his cellphone in his own world.

My eyes jerk to the door. I didn’t even hear him. Thank God he didn’t walk in and see us.